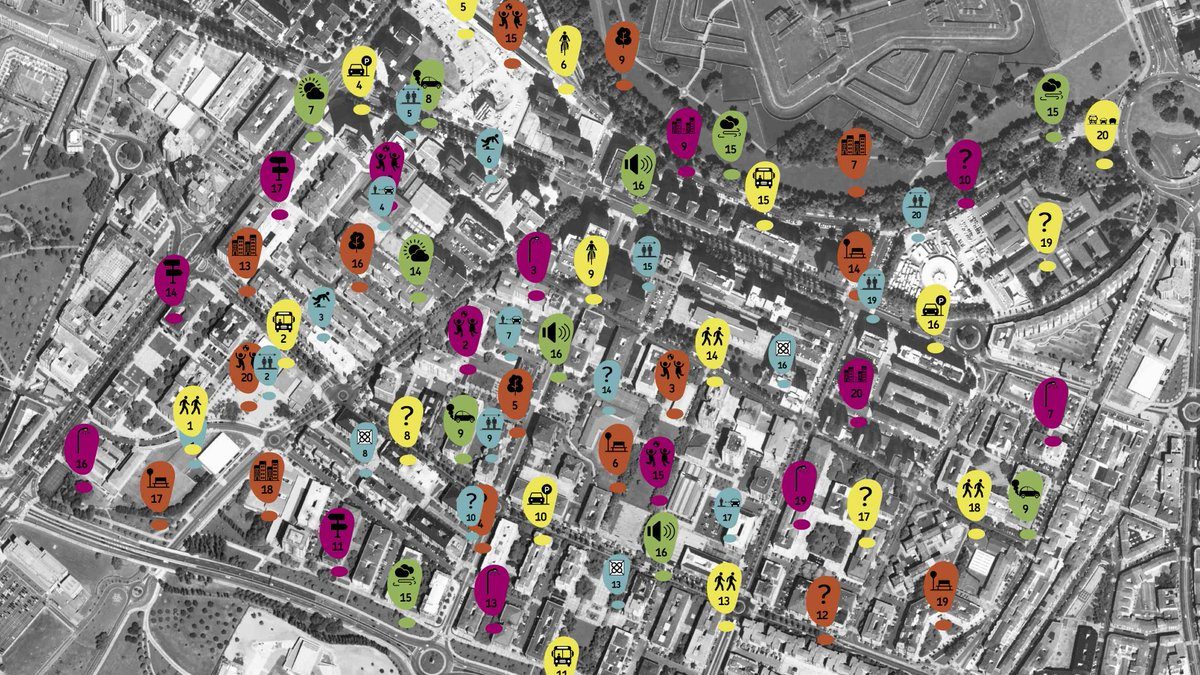 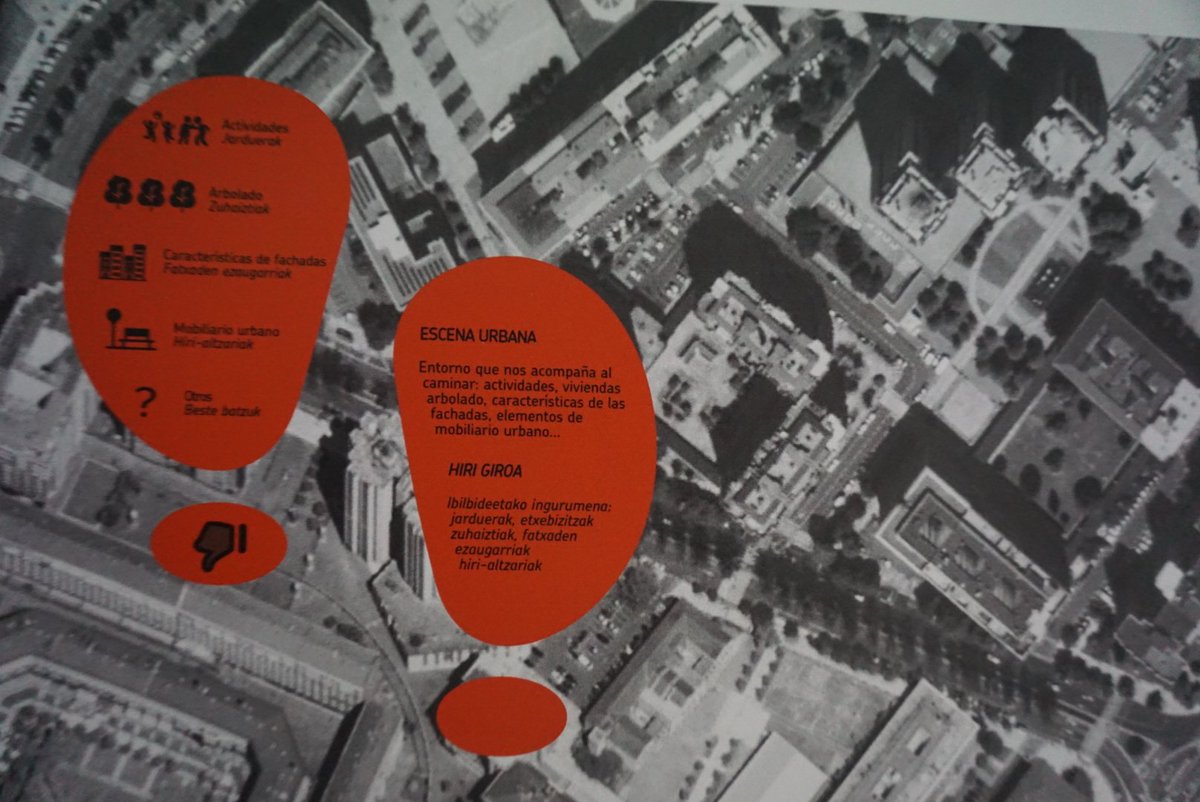 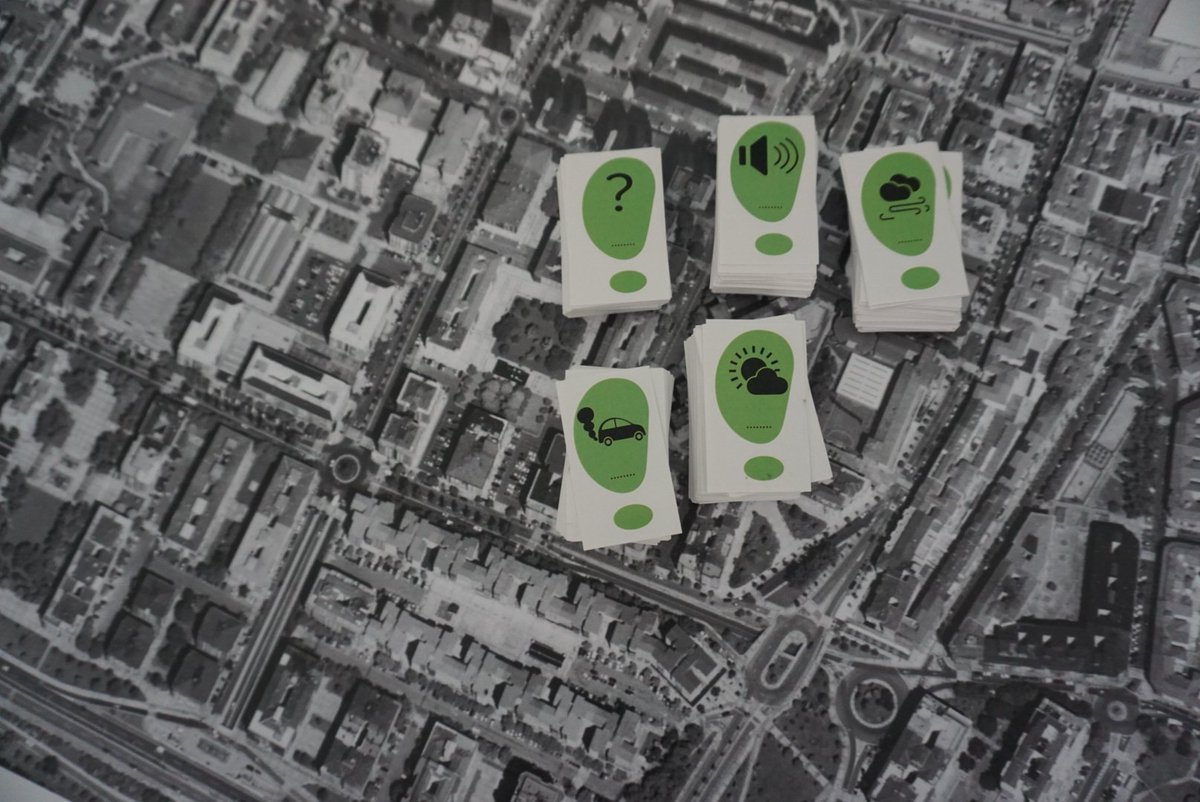 With an active dynamic, this participatory workshop was designed together with URBANBAT, proposed as a workshop for exploration and analysis of urban walkability, to explore the Iturrama neighborhood on foot, being aware of everything that surrounds, accompanies and influences us when walking.

The aim was to collectively analyze the degree of ease of locomotion and pedestrian experience offered by the urban spaces of the neighborhood.

The workshop consisted of the walk as a form of urban exploration, the collective mapping for a diagnosis of the quality of walkability and a pooling phase aimed at proposing possible improvements in public space.

The dissemination of this workshop was also done by sending emails prior phone call to the list of identified neighborhood agents. Entries were received from 9 people and it was also convened through the posters distributed across the neighborhood and within the content of the month of mobility program, publicized on the website of the mobility area of the City Council. 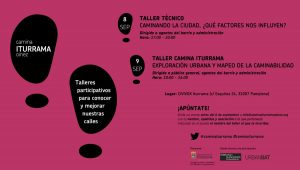 The hastag #iturramaoinez and #caminaiturrama were created on twitter for the dissemination of the project and the actions, but also to collect the impressions and suggestions of the people who wanted to participate.

Approximately 20 adults attended the workshop, some accompanied by children since the approach of the workshop was aimed at a more familiar audience.

A brief explanation of the dynamics to be developed was made and the necessary materials were distributed to go through the neighborhood by groups. The neighborhood was divided into three areas to be traveled on foot, and distributed to the exploration groups, every individual was assigned a family of factors in which they much be specifically looked at and identified by stickers.

While the exploration was taking place, part of the work team remained in the Civivox were mapping the photographs that were being received.

The second part of the workshop was developed in the Civivox classroom, with a visualization of the mapping done among all. Then, a working session on plans was held by groups dedicated to each of the families of analyzed factors, where specific proposal made by the attendees were put in common.

Conclusions of the workshop

After the work session the reflections, conclusions and proposals were exposed to the group, taking the plans of the neighborhood in large format as a base to facilitate group work.

Workshop attendees were divided into five working groups, each focused on a plan to work on each of the factor families: mobility distribution, characteristics of the sidewalks, safety, urban scene and environment.

As result of the mapping of the positive and negative factors, the georeferencing of each of the points photographed on the map of the neighborhood have been generated in an open format, accessible from the municipal website of the Mobility Area.

This map can be completed collaboratively and serve as a work for groups or schools that want to reflect on the benefits of walking and the factors that influence. The map allows you to visualize, turning on or off the positive and negative factors of each of the areas analyzed (mobility distribution, characteristics of sidewalks, safety, urban scene and environment), and consult the images associated with each of the points mapped. The work with this map allows deepening the analysis and mapping the Iturrama neighborhood factors that positively or negatively affect the walkability.  With that aim in view, the map has been shared via email with the neighborhood agents and associative fabric.